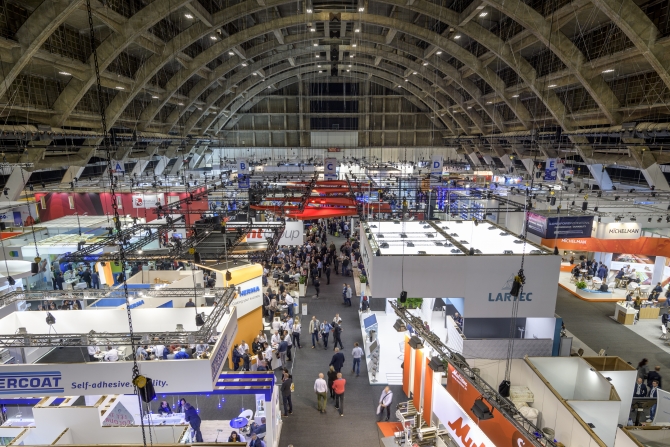 The landmark 40th anniversary edition of Labelexpo Europe 2019 has closed on a high note, with its largest, most international show held to date. A total of 693 exhibitors took part in the show, which took place between 24-27 September, at Brussels Expo in Belgium.

Spread over nine halls and covering almost 40,000 sqm of floorspace, up from 2017, the show presented the largest offering of label and package printing technologies and live demonstrations seen to date. This included the fast growing areas of hybrid printing, flexible packaging and automation.  Poor weather didn’t deter 37,903 visitors from 140 countries flocking to the four-day show – a substantial increase on 125 in 2017. India, China and Japan were especially well represented with large visitor delegations. Eastern Europe also showed a stronger representation compared to 2017, in particular Croatia, with a 51 percent increase, Lithuania (36 percent), Romania (25 percent), and Russia (14 percent). Brazil also saw a 14 percent increase on visitors compared to 2017.

Chinese manufacturers also fared well, with sales highlights including label press manufacturer Wanjie’s sale of a printer to a converter in Spain. Rhyguan sold three finishing systems on  day one - one to an Italian converter and two to companies in Germany.

Demonstrating that the show has evolved from a labels show into a wider package printing show, flexible packaging innovations were much in evidence on the show floor, with press launches including OMET’s new X7 flexo printing machine for labels and flexible packaging with 670mm (26”) web width. Lombardi unveiled its Invicta i2 line, designed for flexible packaging in the mid web sector, while Nilpeter launched its 17” wide FA-Line press featuring cold foil, lamination and their new high-speed semi-rotary die-cutting unit.

Hybrid machinery was another key trend much in evidence, with launches including BOBST, who unveiled its new Master DM5 hybrid label press, and MPS, who launched a new 17”/430mm edition of the hybrid EF Symjet press. Mark Andy unveiled a new entry- to mid-level digital hybrid press, which was demonstrated live at the show with advanced in-line converting.

Lisa Milburn, managing director of Labelexpo Global Series, said: “We are delighted that our 40th anniversary edition of Labelexpo Europe has been our largest, most international to date, especially as it is now rapidly moving forwards into a show that encompasses not just labels but also package printing. This was clear from the incredible array of flexible packaging innovations and hybrid machinery on the showfloor, giving label converters ever more options to diversify their businesses.

“The feedback we have received from visitors and exhibitors alike has consistently highlighted the superior quality of the leads, enquiries and contacts made at the show, with an incredible number of deals sealed on the exhibition floor and 83 per cent of space already booked onsite for Labelexpo Europe 2021. This demonstrates that the global label and package printing industry remains as vibrant as ever, and that this show – 40 years on – is still a vital platform at the forefront of the entire supply chain.”

At the neighbouring Sustainability Insight Café, sponsored by Avery Dennison, Xeikon, Ravenwood Packaging, and Sihl ARTYSIO Packaging, visitors were able to see how they might boost their green credentials with a gallery of the latest sustainable innovations.

Reflecting increasing interest from Asia, and with just two months until Labelexpo Asia 2019, Labelexpo Europe 2019 also hosted its very first China Day on day one. This saw representatives from more than 100 label printers and converters from China visiting the exhibition, including the vice president of trade association PEIAC, key show partner to Labelexpo Asia 2019.

At the Labelexpo Global Series press conference on day one of the show, Milburn also presented further details about the newest addition to its portfolio, Labelexpo Mexico 2021, along with its new Brand Print global series of events aimed at printers of promotional materials and collateral for brands.

The Label Industry Global Awards 2019 took place on the evening of day one, with winners from Avery Dennison, Esko, GMG and GEW honored at the 1980s themed celebration, which also marked Labelexpo’s 40th anniversary. The event was hosted by 1980s singing legend and performer Tony Hadley.

To view photos from Labelexpo Europe 2019, visit the show gallery.

For further details about product launches at Labelexpo Europe 2019, visit the online newsroom.

The biennial Labelexpo Europe is part of the Labelexpo Global Series and its largest event. Since the inaugural event in 1980, it has become established as the leading global industry platform for label and package printing professionals, and renowned for its high number of live machinery demonstrations. The show brings together manufacturers and suppliers of the most advanced collection of technology with printers, brand owners and designers under one roof. The key focus of the 2019 edition – “Move your business forward” – was on improving business strategy and moving the industry forward.

A total of 37,903 visitors attended the four-day show.

To keep up to date on the latest developments, follow Labelexpo on Twitter at @Labelexpo or visit www.labelexpo.com.

Stay up to date

Subscribe to our free email updates.
You'll get about two emails per month. We'll never share your address.